There are many beautiful, historic and military-themed cemeteries in Richmond which are appropriate to visit on Memorial Day. Visiting Richmond’s 18th and 19th century burial grounds is a chance to experience landscape designs, artwork and biographies of the notable deceased while enjoying nature.

But visiting a cemetery is not a typical walk in a park. There is a specific etiquette and level of respect that is necessary in these sacred spaces. Before or after you go check out the website Richmond Cemeteries, which offers numerous podcasts on people buried in Richmond’s burial grounds and the context in which they lived. Many of the organizations that run these sites organize community service days to maintain the properties and give respect to those interred there. 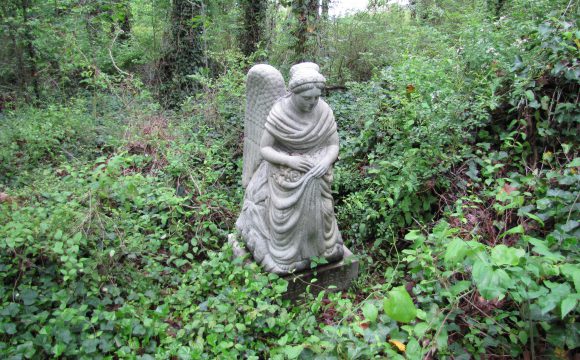 The African Burial Ground is located at 15th and E. Broad streets in the historic Shockoe Bottom neighborhood, home of Richmond’s original 32-block footprint, laid out by William Mayo at the commission of city founder William Byrd II, in 1737. Known only as a “Burial Ground for Negroes” on an 1809 surveyor’s map of Richmond, Richmond’s African Burial Ground was active from 1799 through 1816. It is notable for being Richmond’s first municipal cemetery that was designated for the burials of Black people, and for being the site of the city gallows where many of the members of the slave revolt of 1800 were hanged, including its principle organizer and strategist, 24-year old enslaved blacksmith Gabriel, known at the time as “General Gabriel,” on Oct. 10, 1800. His burial place is unknown. 1540 E Broad St, Richmond, VA 23219

Barton Heights Cemeteries started with the Phoenix Cemetery and was established in 1815.  When the city was slow to move after the 1810 petition of Christopher McPherson for a new burying ground for free people of color.  They established their own burying ground north of the city.

East End is a historic African American cemetery in Henrico County, Virginia. Established in 1897 next to Evergreen Cemetery, East End is the final resting place of an estimated 13,000 people, among them some of the most prominent black Richmonders of the turn of the 20th century: Rosa D. Bowser, a pioneering educator and civic leader; Hezekiah F. Jonathan, a business owner and the vice president of the Mechanics’ Savings Bank (founded by Richmond Planet editor John Mitchell Jr., who is buried at Evergreen); William Custalo, the longtime proprietor of Custalo House, a noted bar and restaurant on Broad Street; and Dr. Richard F. Tancil, a Howard University–educated physician and bank president. 50 Evergreen Rd, Richmond, VA 23223

Since its founding in 1891 by leaders of Richmond’s African American community, Historic Evergreen Cemetery has served as a powerful monument to black achievement, community life, and family bonds. Evergreen is the resting place for thousands of individuals who faced segregation, discrimination, and racial violence while contributing in important ways to the city’s—and the nation’s—vibrant social, political, intellectual, and religious life. Among those who rest here are such luminaries as Maggie L. Walker, John Mitchell, Jr., Dr. Sarah Garland Boyd Jones, and Rev. J. Andrew Bowler. More than 10,000 lesser-known Richmond heroes are buried throughout Evergreen’s 60 acres. We invite you to make history with us by becoming involved and helping to honor those resting in this long-neglected national treasure!

Forest Lawn Cemetery and Mausoleum is a cemetery located at 4000 Pilots Lane, Richmond, Virginia. The cemetery was established in 1922. Previously it was the estate of John Carter and was known as Myrtle Grove Plantation. 4000 Pilots Ln, Richmond, VA 23222

The Cemetery for Hebrew Confederate Soldiers is a Jewish cemetery in Richmond, Virginia. Along with a cemetery for Jewish veterans of World War I located in Weissensee, Berlin, it is the only Jewish military cemetery not located in Israel. N 4th St & Hospital St, Richmond, VA 23219

Hollywood Cemetery is a large, sprawling cemetery located next to Richmond, Virginia’s Oregon Hill neighborhood at 412 South Cherry Street. Hollywood Cemetery was designed in 1847 in a rural garden style to escape the grid-like monotony of city cemeteries. A major feature of the cemetery is its many stately trees that were left untouched by landscape designer John Notman. Garden cemeteries were designed with the living in mind and meant to be a haven for people to escape the city and enjoy a peaceful setting. Hollywood Cemetery’s paths wind over 135 acres – through valleys, over hills and beneath stately tulip poplars and white oaks. There are over 2,000 trees in the cemetery today; many of which predate the cemetery.Notables: Pres. James Monroe, Pres. John Tyler, Jefferson Davis, Virginia governors, Civil War Era

Oakwood Cemetery located on the east end of Richmond between Nine Mile Road and Stony Run Parkway, is a large, city-owned burial ground that was established in 1854.  The first burials made there were of people of color in 1855. The number of interments made for African Americans was very low, until after the closing of the Shockoe Hill African Burying Ground in June of 1879. Oakwood is known for the 16,000 graves of Confederate soldiers during the Civil War. In 1866, the Jewish Keneseth Israel congregation’s community established a cemetery plot there. The 176 acres includes grand plots of wealthy residents and numerous African American Richmonders interred there. However, this was a site grave robbers targeted, seeking cadavers for students to study at the Medical College of Virginia.

St. John’s Church, Site where Patrick Henry gave his “Liberty or Death” speech. The graveyard surrounding the church was the first public cemetery in Richmond and it holds significant historical interest. Many people important to Richmond and Virginia are buried here, including George Wythe, who not only signed the Declaration of Independence, but also taught the law to Thomas Jefferson, Chief Justice John Marshall, and Henry Clay. 2319 E Broad St, Richmond, Virginia 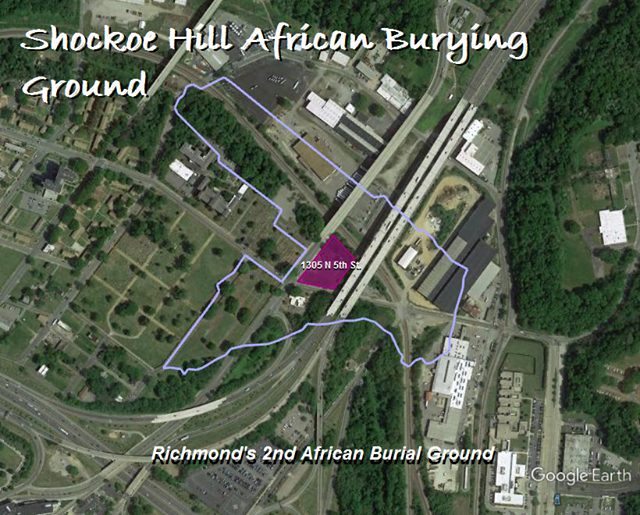 Shockoe Hill African Burying Ground, was established by the City of Richmond in 1816.  It began as two one-acre plots at the northeastern corner of 5th St. and Marshall St. (now Hospital St.). Its grounds were increased greatly over time, with estimated interments of more than 22,000.  It was a segregated part of the Shockoe Hill Cemetery and is likely the largest burying ground for Free People of Color and the enslaved in the United States; though it is unrecognizable as an African burial ground today. It was closed to new burials in 1879 due to overcrowded conditions. In 2021, the parcel at 1305 N 5th St., across the street from the Hebrew Cemetery, has an abandoned auto service station and billboard on it but, despite its important past, no historic marker or headstones. For a number of years, Lenora McQueen has been advocating for the city to acquire the Shockoe Hill African Burying Ground, which is Richmond’s second African Burying Ground, to appropriately memorialize the site. McQueen wants people to know that the full burial ground extends well beyond that area. and that 1305 N. 5th. is just a portion of the original 1816 burying ground. This may become a reality as the city of Richmond is working to acquire 1305 N 5th St.