The month of November is Native American Heritage Month. There are many ways to learn more about the history of indigenous people in Virginia. Encyclopedia Virginia has an online description of the history of the Monacan, Powhatan, Mattaponi, Pamunkey peoples. Consider visiting “Mantle,” the monument installed on Capitol Square honoring the history, legacy, perseverance and many contributions of Virginia’s tribes.

Upcoming Richmond-area events that focus on Indigenous people and events:

•Pocahontas Reframed Film Festival: Nov. 19-26 at the Virginia Museum of Fine Arts, other venues and virtually.

•In November there is traditionally a Richmond American Indian Pow-Wow held at the Richmond International Raceway.

The history of Native Virginians comes to light every year at the annual Indian Tax Tribute Ceremony, a Thanksgiving tradition at the Executive Mansion for more than 300 years, where members of several Native American tribes present gifts to the Governor of Virginia. This annual tradition, is part of the Indian Tax Tribute Ceremony that dates back to the Treaty of the Middle Plantation in 1677. 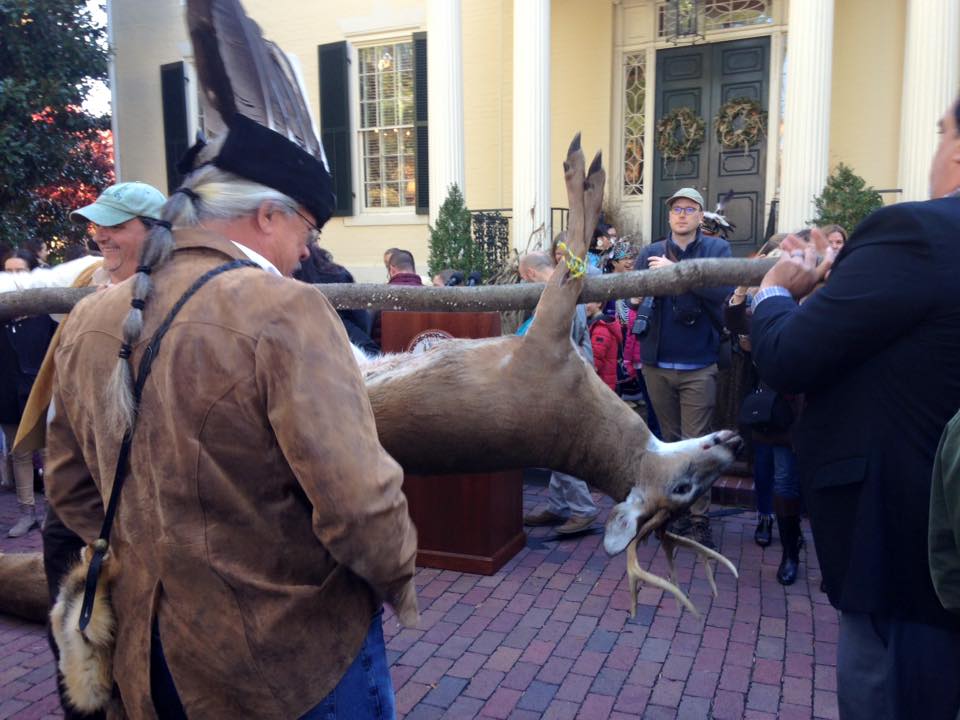 Annual “tax” or tribute at the Governor of Virginia Executive Mansion to mark the peace treaty with the Pamunky & Mataponi nations (2018).

The Library of Virginia’s website reminds us “Indigenous peoples were not American citizens even after ratification of the Fourteenth Amendment, and they were often discriminated against and denied the equal protection of the laws. After the Civil War, white government officials in Virginia began to enforce racial distinctions that before the war had not always affected Indigenous descendants. After the creation of the public school system, Indigenous children were not allowed to attend white schools. Legalized segregation forced Indigenous communities to search for differences between themselves and Black Americans. For Indigenous peoples tribes, reasserting Indigenous identity meant rejecting the biracial, historical categories of “white” and “colored.” Schools became a key site to assert Indigenous autonomy. Between 1880 and 1920, many Indigenous communities established their own schools rather than attend Black schools. In this way, Indigenous peoples resisted the color line by insisting on the creation of “Indian” as a third category. In Virginia, the Pamunkey tribe went so far as to carry membership cards with them so they could not be forced onto the “colored” railway coach. The Pamunkey Tribe established its own school, which consisted of a single-story frame building.” Want to learn more? There are also various resources and information about indigenous people of Virginia at the Virginia Museum of History & Culture.

The Smithsonian National Museum of the American Indian suggests numerous ways to celebrate Native American Heritage Month wherever you are like planting native plants, reading an indigenous writer or attending a virtual event. PBS offers numerous films about the history of and issues surrounding Native Americans.

Native American Museums near Richmond include:

•Fralin Museum of Art at University of Virginia has an extensive Native American art collection as does the Valentine Museum.