Spring is a really good time to go out and see Richmond’s open air murals. You can do it on your own or check out some of the documented guides that give background about the artists, places and histories. 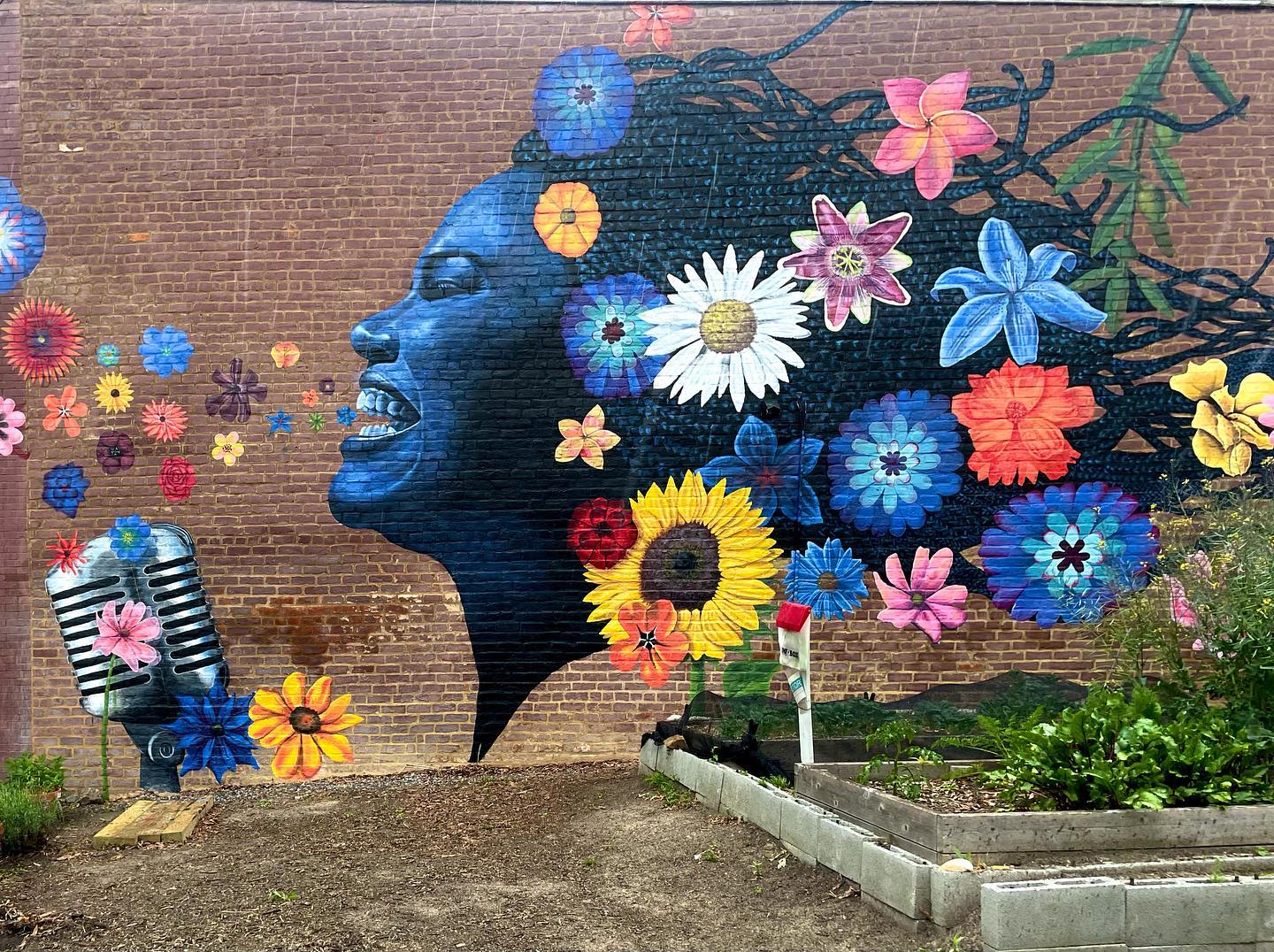 This new mural by S. Ross Browne at 1222 Parkwood Ave. is located next to the VCU Learning garden was completed in May 2021.

The Valentine Museum offers FREE self-guided city tours. the museum’s Jackson Ward – Self-Guided Murals Walking Tour homes in on one walkable neighborhood’s history and the art on public walls that tell its history. 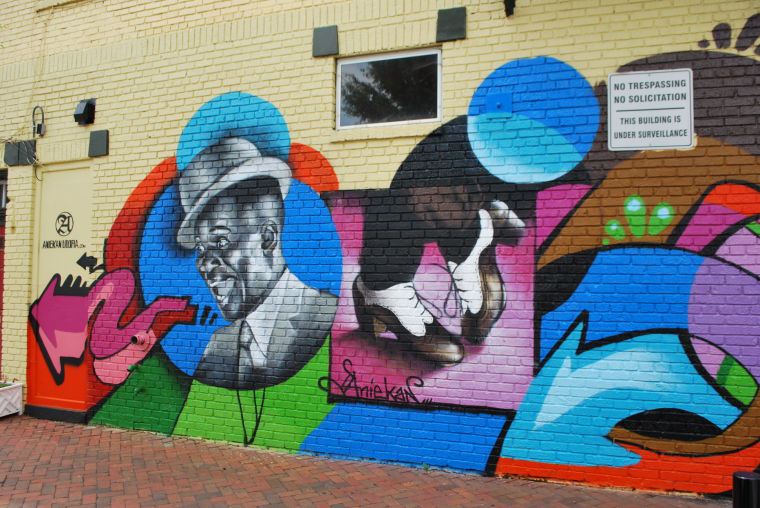 The performer Bojangles is depicted in this mural by Aniekan at 205 East Marshall Street. Photo credit: Richmond Mural Project.

Springtime temperatures make now a good time to view Richmond’s many FREE, outdoor murals, including this boisterous image of Vermont U.S. Senator and former presidential candidate Bernie Sanders at 3300 W. Broad Street by Mickael Broth. (The image of Bernie from the Biden inauguration is doctored in by the FREE Put Bernie Anywhere app.) Pay homage to the man who advocates for policies that address systematic racism and exploitation. 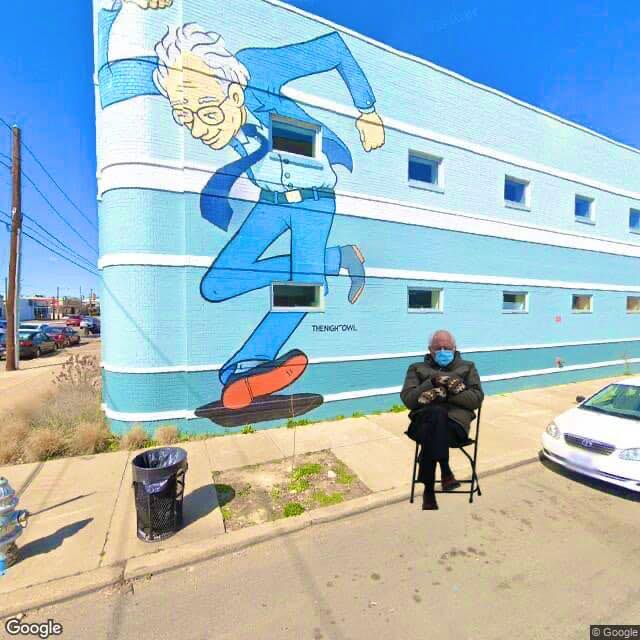 Thanks to Melissa Thomas McKenney for getting the exact coordinates to place Bernie Sanders’ iconic inauguration stance in front of Mikel Broth’s lively mural of the Vermont senator’s dancing likeness.

It seems like these lively and often colorful images are constantly going up adding an exciting hue and message to the landscape, like the city’s latest mural “Brown Ballerinas For Change” 23′ x 14′ on historic brick in the FAN District of Richmond, Virginia located on the corner of Granby and Main, across from Goatocado restaurant and just down the street from the Visual Arts Center. 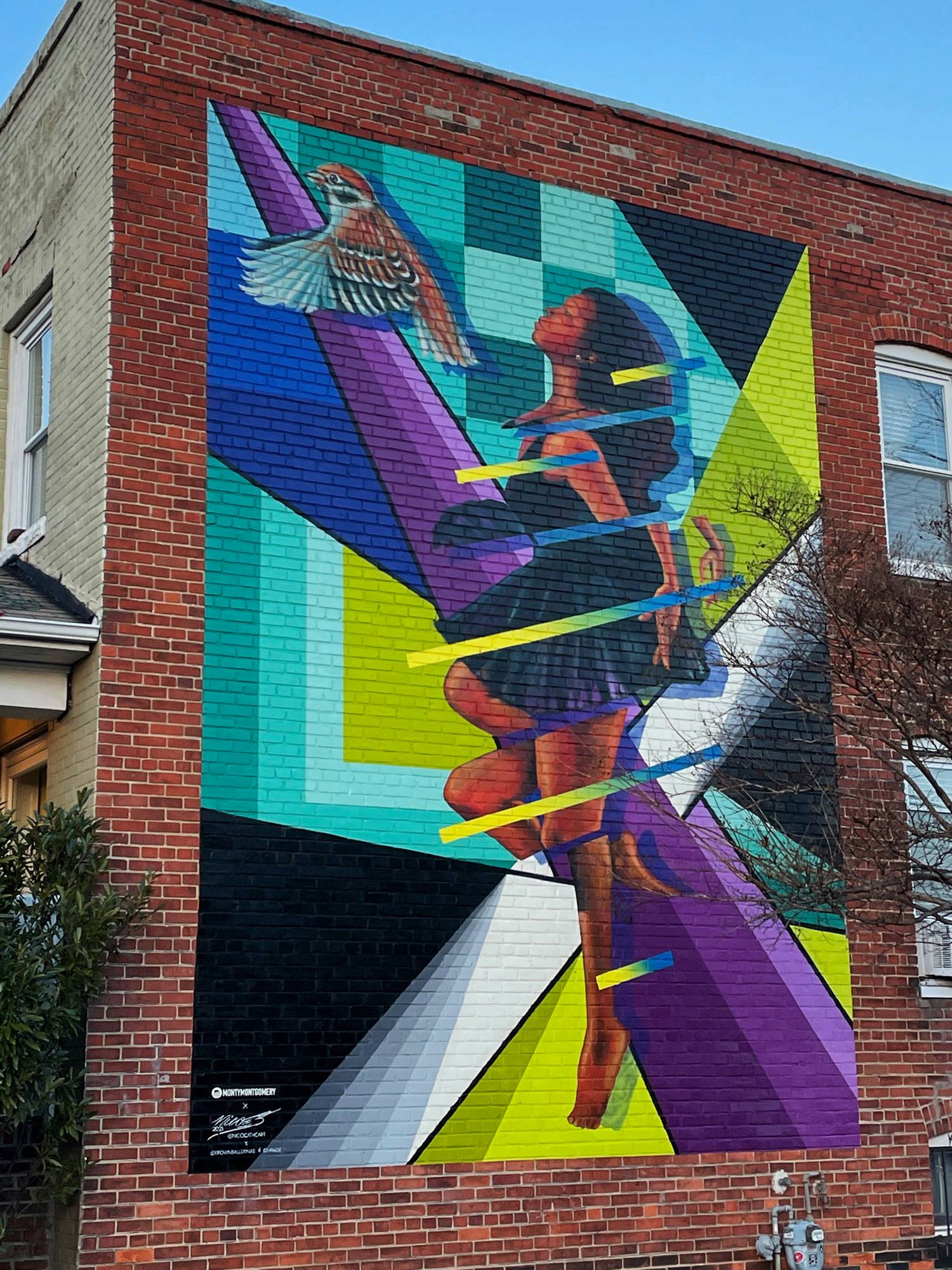 Artist Monty Montgomery writes: The “Brown Ballerinas for Change” collaborative mural with Nico Cathcart has been completed in the Fan District of Richmond, Virginia on the corner of Main and Granby streets. The mural is inspired by the activism and power of the four young women who make up Brown Ballerinas for Change. The mural contains all four ballerinas unified together in a graceful jump with a sparrow in flight symbolizing renewal and change. We are all so thankful for the uplifting energy that Ava, Kennedy, Sophia, and Shania have gifted the country. The mission of B.B.F.C. is to help create advocacy, social justice, and to increase participation of underrepresented populations in ballet. To learn more, please visit the site at www.brownballerinasforchange.com. Photo credit: Monty Montgomery / Facebook 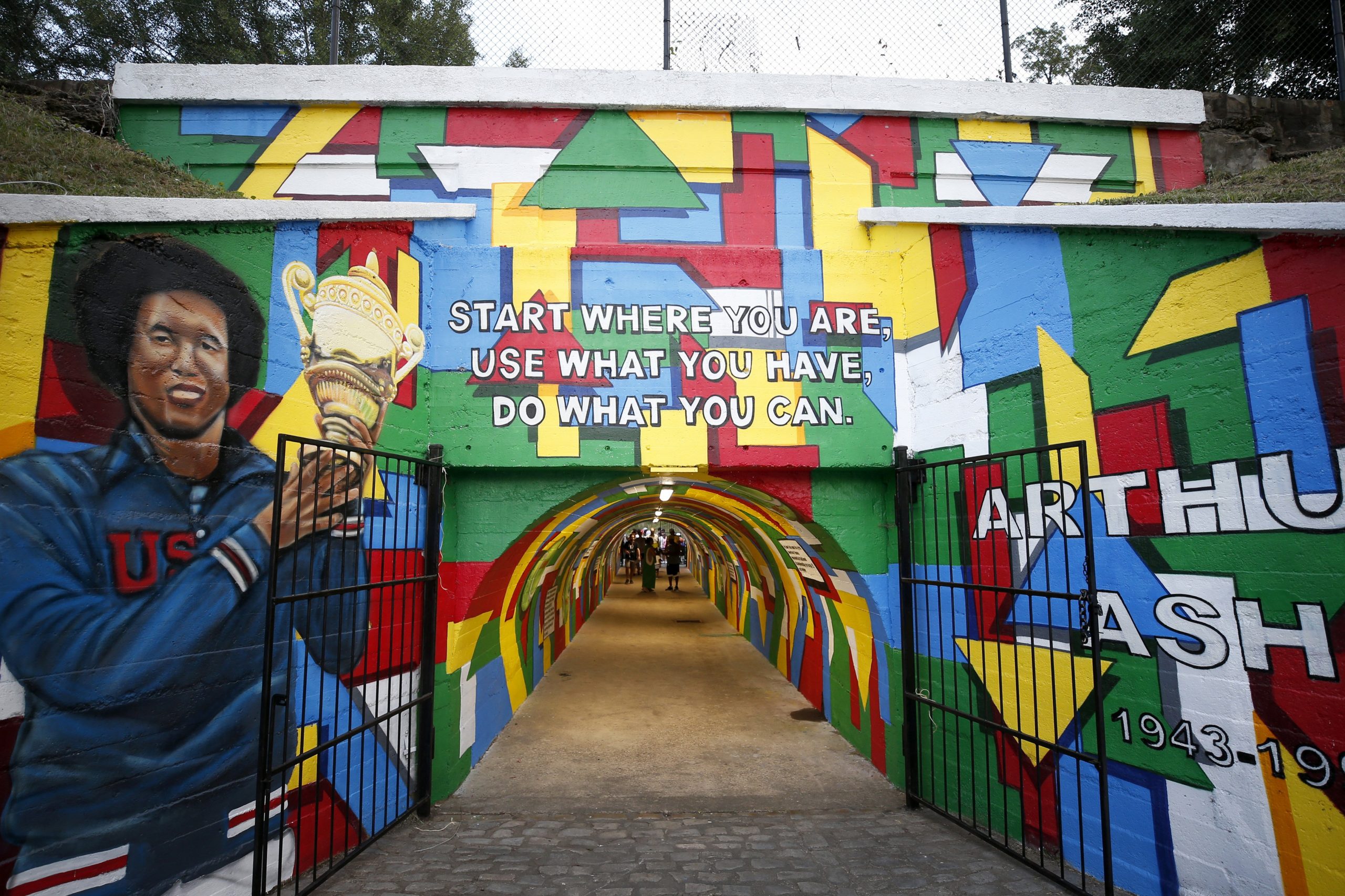 The bright pop of colors on Richmond’s brick, wood and cement walls are a collection of eye catching images that entertain and inform. It is possible to take in these images by foot, bike or car. There are numerous murals on Cary and Main Streets as a result of past Richmond Mural Projects. But the images project beyond the west side of the city.

This new interactive mural, Freedom Constellations: Dreaming of a World Without Youth Prisons was unveiled in November and is located across the street from the VCU police department headquarters on Broad Street in downtown Richmond. Freedom Constellations makes a powerful statement that a better future is possible for Virginia’s young people – one where youth are invested in rather than placed behind bars. The mural is a collaboration between CodeVA, Performing Statistics and RISE for Youth.

If you love murals, keep your eye on and even volunteer with the Mending Walls RVA project, a public art project that brings together public artists from different cultures and backgrounds to create murals that address where we are now in society and how we can move forward through understanding and collaboration. 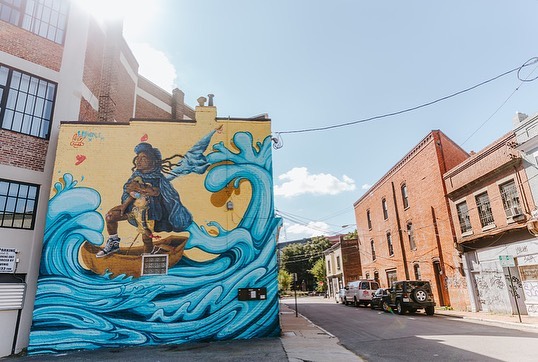 Before you go on an excursion to see murals around Richmond, read up on these sources of documentation to get an understanding of the locations, artists and messages. 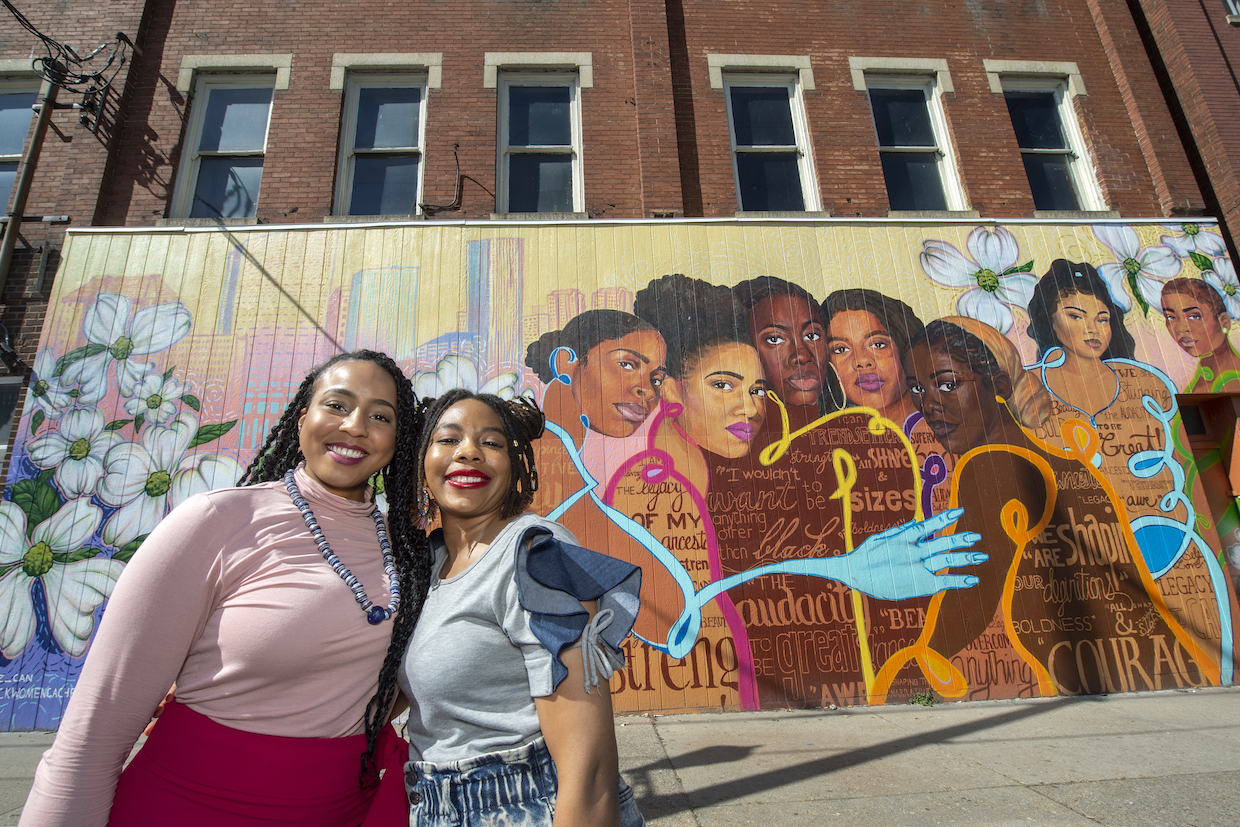 Before you go to view Richmond’s FREE, outdoor murals

If you are feeling inspired to create mural art, consider taking a class at the Visual Arts Center.